Sold on a Monday

Runaway bestseller—featured on the TODAY show! 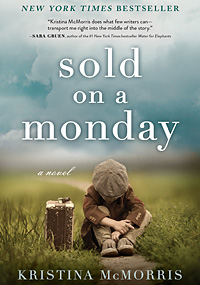 The sign is a last resort. It sits on a farmhouse porch in 1931, but could be found anywhere in an era of breadlines, bank runs, and broken dreams. It could have been written by any mother facing impossible choices.

For struggling reporter Ellis Reed, the gut-wrenching scene evokes memories of his family's dark past. He snaps a photograph of the children, not meant for publication. But when it leads to his big break, the consequences are more devastating than he ever imagined.

At the paper, Lillian Palmer is haunted by her role in all that happened. She is far too familiar with the heartbreak of children deemed unwanted. As the bonds of motherhood are tested, she and Ellis must decide how much they are willing to risk to mend a fractured family.

Inspired by an actual newspaper photograph that stunned the nation, Sold on a Monday is a powerful novel of love, redemption, and the unexpected paths that bring us home.

(Features a few familiar characters from The Edge of Lost.)

For Sold on a Monday recipes, playlists and more, download the Book Club Guide.
And check out some of Kristina's favorite book clubs in the photo gallery.
(To add your book club, just send a picture to Kristina!) 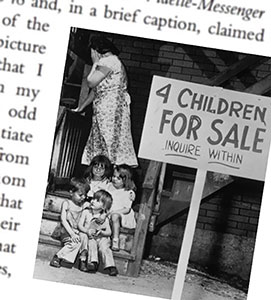 For the characters in this story, their journey all started with a picture—and the same can rightly be said of my endeavor to write this book. When I first stumbled upon an old newspaper photograph of four young siblings huddled on the steps of an apartment building, their mother shielding her face from the camera, the sign in the foreground stunned me.

4 CHILDREN FOR SALE, it read. INQUIRE WITHIN.

The photo had first appeared in The Vidette-Messenger in 1948 and, in a brief caption, claimed to exhibit the desperation of a family in Chicago. As a mom myself, I wondered what could have possibly pushed a parent to that point. In the direst of times, I could fathom perhaps having to give up my children for the sake of their well-being. But why on earth ask for money in return? Possible answers to that question soon became the foundation of Sold on a Monday.

"A vivid and original story... McMorris brilliantly chronicles the way in which a moment's fateful choice can result in a lifetime of harrowing consequences. A masterpiece that poignantly echoes universal themes of loss and redemption, Sold on a Monday is both heartfelt and heartbreaking."
Pam Jenoff, New York Times bestselling author of The Orphan's Tale
"The sale of two young children leads to devastating consequences in this historical tearjerker from McMorris... A tender love story enriches a complex plot, giving readers a story with grit, substance, and rich historical detail."
Publishers Weekly
"[A] finely told, emotionally satisfying gem of a novel. McMorris handles the dual points of view confidently, and each decision made by the main characters is completely believable even as the secrets they share and uncover become more and more shocking."
Historical Novels Review
"With her signature style, Kristina McMorris once again plucks a devastating heartstring. A real-life photograph stands as evidence to the heart of this novel: truth revealed, forgiveness found, and a story never to be forgotten."
Sarah McCoy, New York Times bestselling author of The Baker's Daughter
"Despite the sensitivity of the subject of missing children, McMorris' latest is touching and never maudlin. This book may appeal to fans of Lisa Wingate's Before We Were Yours."
Booklist
"A riveting tale that holds surprising resonance for today's news climate."
Toronto Star
"Sold on a Monday is a stunningly moving novel that takes on the Great Depression and one man's struggle with honor, ambition, and unimaginable sacrifice. Kristina McMorris has crafted a true page-turner that you won't want to miss."
Laura Spinella, bestselling author of Ghost Gifts and Echo Moon
"McMorris shines in this poignant and compulsively readable novel... Based upon a haunting historical photograph, and told with finesse and compassion, this story will linger long after the pages have all been turned."
Stephanie Dray, New York Times bestselling author of America's First Daughter
"The story has grit, a complex plot and historical detail depicting the tragedies of families who are poor and ill. A good read... it makes you wonder what you would do in circumstances that prevent you from providing basic daily needs for your children. Sold on a Monday will remind you of Lisa Wingate's Before We Were Yours."
The Daily News